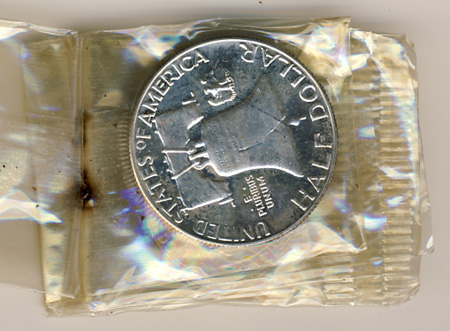 Continuing the trend, the 1952 Proof Set (Buy on eBay) recorded sales that exceeded the total for the preceding year. The annual offering from the United States Mint, which included a proof version of each coin issued for circulation, continued to draw increasing interest from collectors. The total sales of 81,980 sets represented nearly four times the sales level of the final set issued prior to World War II.

The format, content, and pricing of the set remained consistent with recent years. Each 1952 Proof Set included the proof Franklin Half Dollar, Washington Quarter, Roosevelt Dime, Jefferson Nickel, and Lincoln Cent. All coins were struck at the Philadelphia Mint and typically carry a brilliant finish. Less commonly encountered are coins which display a cameo or deep cameo finish. These coins will exhibit frosted raised design elements and mirrored backgrounds.

An interesting variety to look for within the 1952 Proof Set is the so-called “Superbird” Washington Quarter. On the reverse some quarters, a distinctive “S” appears in the center of the bird’s chest, reminiscent of Superman’s costume. It is suspected that a mint employee added the “S” intentionally to a single reverse die. This suggests that perhaps 15,000 to 20,000 examples of the variety may have been created, with an even smaller number of survivors.

The 1952 Proof Sets were once again packaged in small, square cardboard boxes sealed with paper tape. Within the boxes, the coins were placed within individual cellophane sleeves and stapled at the top. The original issue price of each set was $2.10.