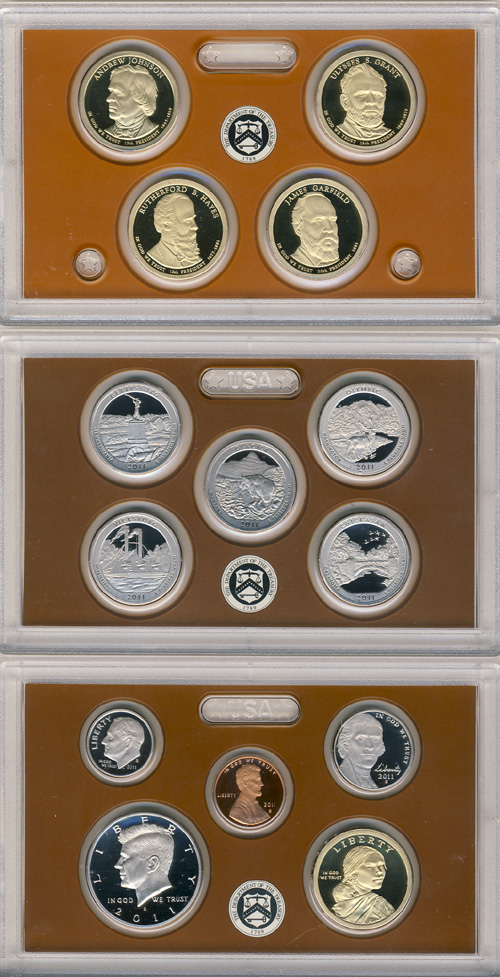 Following several years of changes for the US Mint’s most popular annual set, the 2011 Proof Set (Buy on eBay) contained the same number of coins as the prior year and did not represent the start of any new series. It did, however, continue three separate ongoing coin series featuring rotating designs.

In addition to the coins with rotating designs, there were some familiar constants within the 2011 Proof Set, including the Roosevelt Dime, Jefferson Nickel, Kennedy Half Dollar, and the Lincoln Cent with the Union Shield reverse design.

The 14 different proof coins were struck at the San Francisco Mint and carried the “S” mint mark. Packaging for the set featured the United States Mint’s recently reinvigorated branding concept.

Besides the core annual set, the Mint also released separate proof sets for the quarters and Presidential Dollars, as well as a set containing 90% silver coins.

The United States Mint began sales of the 2011 Proof Set on January 11, 2011, with pricing established at $31.95 per set. This was the same price in effect for the prior year set. Sales continued until December 31, 2012, by which time 1,098,835 sets had been ordered by collectors. This final mintage was basically flat compared to the previous year.