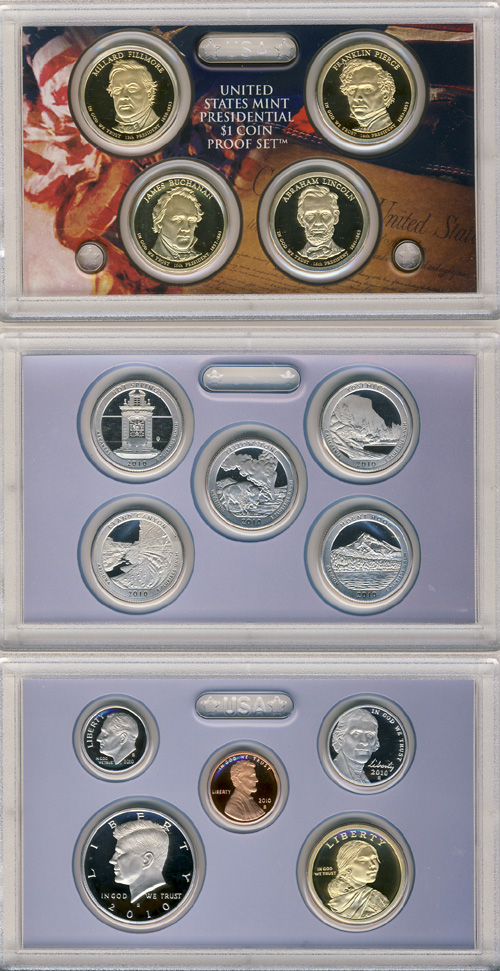 The 2010 Proof Set (Buy on eBay) marked the debut of a new series of circulating commemorative quarter dollars, following the conclusion of the separate programs featuring the states and territories. The new America the Beautiful Quarters would feature a different National Park or site from each of the states and territories over the course of twelve years. So far the reaction to the new series and impact on numismatic sales has been considerably less enthusiastic than the State Quarters launch more than a decade ago.

The price for the basic annual proof set was $31.95, representing an increase of $2 despite the reduced number of coins per set. Sales began on July 22, 2010 and eventually concluded on December 30, 2011. During this lengthy period of availability, total sales reached 1,103,815, representing a significant move lower compared to the previous year.

Coins included in the set with familiar designs were the Jefferson Nickel, Roosevelt Dime, and Kennedy Half Dollar.

Packaging for the 2010 Proof Set underwent a change to coincide with the launch of the new quarter program. The proof coins were sealed in three separate lenses, containing the quarters, the Presidential Dollars, and the remaining coins. These lenses were placed in a cardboard box illustrated with a picture of the San Francisco Mint. A certificate of authenticity was included with each set.